Non-bank lender Firstmac Limited has completed a $1.3 billion RMBS raising with a record $2 billion in orders, after both the securities themselves and the roadshow were specially tailored to the COVID-19 environment.

Chief Financial Officer James Austin said the issue was oversubscribed from an early stage and supported by a record 31 institutions which was more than double the 10-12 that had typically invested in the past.

“This issue has received record support, partly because investors had built up cash in recent months as they waited for clarity around Covid-19 impacts to the economy,” Mr Austin said.

“Our regular monthly reporting of Covid-19 exposures and experience across our portfolio has been well received in the market, creating confidence for institutions to invest.”

Mr Austin said the raising would provide funding for Firstmac to continue to compete strongly in the prime mortgage space.

It comes in the same week as Firstmac reduced interest rates on flagship home loans in both its third-party and retail channels.

Mr Austin said Firstmac had presented a defensive structure which included a senior fast pay note, together with a three-year soft bullet.

Unlike Firstmac’s $1 billion issue at the height of the COVID-19 crisis in March, the latest issue did not require any support from the Australian Office of Financial Management (AOFM). Further, AOFM secondary market support for this transaction was negligible at less than 1% of the total issuance volume.

Mr Austin said the roadshow for the RMBS issue was the first to be done entirely online, as COVID-19 travel restrictions made the usual face-to-face meetings throughout Europe, Asia and the US impossible.

“This was a completely digital international roadshow with more than 20 Zoom meetings and we were pleasantly surprised by how effective it was while being much more efficient than travelling around in person,” Mr Austin said.

“With no end in sight for international travel restrictions, it seems that our investors will be shopping online - just like our customers - for the foreseeable future.”

In another adaptation to the COVID-19 situation, the RMBS issued by Firstmac were described as “COVID Free” as they did not include any mortgages impacted by COVID-19 hardship.

The details of the issue are as below. 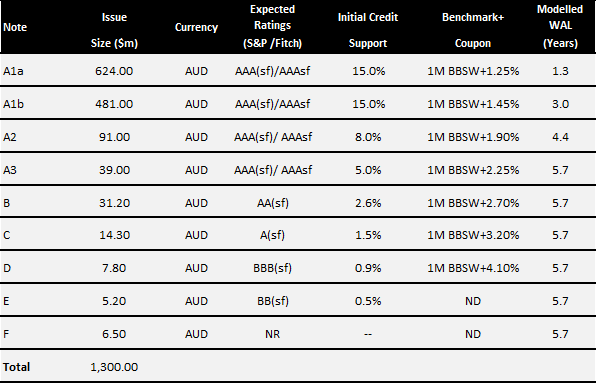 The order book was over $2 billion, far in excess of the maximum $1.3 billion deal size offered. Approximately 56% of the order book gave from offshore investors.

It brings the total amount of RMBS issued by Firstmac in 2020 to $2.3 billion - a significant achievement given the economic backdrop.

The issue is the latest good news for Firstmac, which earlier this month revealed that a new analysis of its $12.8 billion loan book showed the number of home owners on COVID-19 hardship arrangements had fallen as the economy reopened.

The percentage of mortgage holders on fully or partially-suspended repayments due to COVID-19 hardship had dropped to 5.37% at June 30 from 5.65% on May 31.

Firstmac Limited is an independently-owned, Australian financial services provider with more than four decades of experience in home and investment loans. Firstmac has written in excess of 130,000 home loans and manages approximately $12.8 billion in mortgages and $300 million in cash investments. Firstmac is a premier sponsor of the Brisbane Broncos.

Today the Firstmac Group officially launched car buying service OnlineAuto.com.au to address a common pain-point of buying a car in the current market.

We are pleased to announce that the Norinchukin Bank and the Clean Energy Finance Corporation (“CEFC”), on behalf of the Australian Government, h...

Australian homeowners will have access to $230 million in discounted green home loan finance as part of a $750 million green mortgage-backed securitisation r...

Brisbane-based lender Firstmac is pleased to announce it has completed the biggest-ever issue of Residential Mortgage-Backed Securities (RMBS) by an Au...